We all get ill from time to time and have colds, coughs and sore throats. Here are a few answers to what they are, how they’re caused and how you should deal with them as a singer.

What happens when I have a sore throat?

When your throat feels sore it’s very likely that your vocal folds are swollen. The pitch of your voice will probably be lower than usual. Think of stringed instruments. A violin has much thinner strings than a cello and each of its strings is a different thickness. The thickest one is the lowest pitch, the thinnest is the highest pitch. They will be a bit puffy and thick. This means that they can’t vibrate as easily and some air might leak out through the gaps causing the husky or breathy sound. It also makes it very difficult to stretch them to sing high.

Should I sing when I have a sore throat?

It depends how bad your sore throat is. Sometimes it’s possible to sing gently and perhaps leave out the high notes if it’s not too bad but you must never, ever force it to work. You have to be very careful if your vocal folds are swollen as you can do long term damage.  If you can slide gently, easily and smoothly, without any bumps or cracks from the very bottom to the very top of your voice on an ng you’re probably ok to sing. If you have trouble starting the sound clearly and make a noise like a sea-lion it’s best to rest your voice completely. With laryngitis this can happen without feeling sore. The folds don’t have any nerves in them so can be swollen without you feeling it..

When your vocal folds are inflamed (red and puffy). This can be caused by a virus, bacterial infection or by straining your voice and causing too much friction. You may not feel any soreness as the vocal folds themselves have no nerve endings.

When the tonsils become inflamed (red and puffy) this is tonsillitis. This is a viral or bacterial infection.

The pharynx is the space above your vocal folds behind your mouth and nose. When this area gets inflamed (red and sore) this is called pharyngitis. It will probably hurt when you swallow.

A sore throat can combine one or all three of these.

When shouldn’t I sing?

If your voice is husky, breathy, feels scratchy or is sore when you swallow or sing this is a sign that there is something going on in or around your larynx. You should be very wary of singing.

What should I do to recover?

Rest your voice when you can (carry a notepad so you don’t have to talk – it can be fun to write your conversations down), get plenty of sleep, steam for about 10 mins at a time, salt water gargle. (Gargling will not get to the larynx itself (the wrong hole…) so won’t help actual laryngitis or anything viral but can help bacterial tonsillitis and pharyngitis and reduce the likelihood of it spreading to your larynx if you catch it early enough). Avoid anaesthetic throat sweets or sprays. An ordinary sweet will help you produce saliva which can help a little but try to avoid sugary ones. Something with glycerin and honey can be soothing. Sipping water is just as good.

Should I sing if I have a cold?

If you’re just stuffed up, it’s in your nose and you don’t have pain in your throat you should be fine to sing. It can feel a bit different if your nasal passages are inflamed or full of gunk but won’t sound much different except any nasal consonants (n, m and ng). Just let them turn into a d, b or g and they’ll sound pretty similar.

What can I do to help me to recover quickly?

Stay hydrated and steam in order to keep the mucous membranes moist and warm. Most medications will dry you out and make you feel clearer but this is no good for a singer. Avoid anything with menthol, eucalyptus etc. and don’t have anaesthetic throat sweets.

What causes a cough?

A cough is caused by an irritation to the airways or vocal folds themselves and triggers the cough reflex. This can be due to illness, lack of hydration or a dry atmosphere such as air conditioning.

The cough reflex causes the vocal folds to close very tightly so that air builds up behind them and is then forced out at a high pressure to get rid of the mucus. The friction created as the folds bang together makes them hot and more mucus will be formed to protect them. The more you cough, the more you’ll need to cough. (This is also true for throat clearing which can become a habit- try to avoid it) The muscles around the larynx also have to work very hard and can become tired.

What should I do if I get a cough?

Stay hydrated and keep your airways warm and moist. Drink plenty of water and steam. Most medications dry you out so steer clear of them.

What happens when I sneeze

Sneezing is your body’s way of removing irritants from your nose or throat. Part of your nose’s job is to clean the air you breathe, making sure it’s free of dirt and bacteria. In most cases, your nose traps this dirt and bacteria in mucus. Sometimes, however, dirt and debris can enter your nose and irritate the sensitive mucous membranes inside your nose and throat. When these membranes become irritated, it causes you to sneeze.

Sneezing can be triggered by a variety of things, including: allergens such as dust or pollen, viruses, such as the common cold or flu or nasal irritants.

When something irritates your nose it sets off the “sneeze reflex” in your brain and a signal is sent to tightly close your throat, eyes, and mouth. Next, your chest muscles contract strongly, and then your throat muscles quickly relax. As result, air — along with saliva

and mucus — is forced out of your mouth and nose. Some people say that the air can move up to 100 miles per hour (on average it’s around 30 but that’s pretty fast). 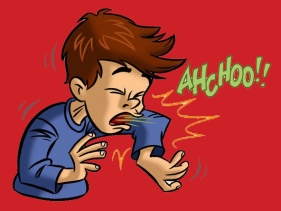 Avoid vocalising a sneeze.  It can be a bit of fun and rather satisfying to be dramatic when you do a big sneeze but BEWARE. Think back to the ‘Bernoulli Principle’. The vocal folds get sucked together when the air travels between them and with the air moving at such a high speed they can bang together very strongly indeed. This can cause a bruise (a little bleed or haemorrhage under the surface) which will stiffen the vocal fold(s) and stop them being able to vibrate.  It can take several weeks for something like this to heal and you can be left with long term damage. Try to sneeze with a ‘ch’ and not add in the ‘oo’.  Don’t ever supress a sneeze as this can be just as damaging for your voice as it can strain the muscles in your larynx.